Linden Wolbert travels the world as a full time professional mermaid and uses her custom-made 6ft tail to propel her through the water.

The 32-year-old free diver and model can swim to depths of 115ft and uses her skills to promote ocean conservation and education. She can hold her breath underwater for up to five minutes.

Linden, from Los Angeles, California, said: 'I grew up as a water baby. My parents are both competitive swimmers.'

'I always looked forward to going to the ocean for our summer vacation. I had a magnetism to the water.' 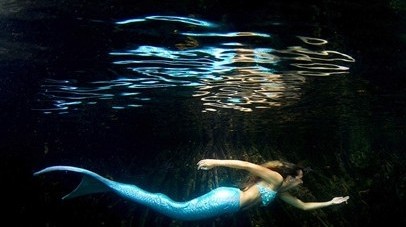 'I've kind of always been a free diver but didn't realise the sport existed until ten years ago. Shortly thereafter, I when began training. Free diving is 70 per cent psychological. You have to be very calm and at ease in the water.'

Linden always dreamed of becoming a mermaid after growing up watching films like The Little Mermaid and Splash but it didn't become a reality until she got to know Hollywood special effects artist Allan Holt.

They spent seven months working on the 35lb tail, which was made from a fibreglass mould of Linden's body.

It involved sealing a monofin inside high-quality silicone to make it hydro-dynamic and effective in the water.

The thousands of fish scales were painstakingly sculpted individually by hand out of clay before they were duplicated in fibreglass and then the final mould was injected with silicone. The whole project cost around £10,000 to complete.

Linden said: 'I was introduced to Allan through a friend. He wanted my advice for an underwater music video. I happened to mention I'd always wanted a mermaid tail but had no idea where to begin. Allan said he'd help me straight away.'

'We set a budget at the start but then things happened. It ended up being way over but it was worth it. My friends and family were all there the first time I used it in the water. I couldn't stop smiling. I couldn't believe it was finally happening.'

In some of these amazing images, Linden is seen swimming in Jellyfish Lake on the island of Palau, which used to be connected to the Pacific Ocean.

Since it has been cut off, it has become home to millions of jellyfish because they have no risk of predators. The 12,000 year-old lake is the only place in the world where you can swim safely among them - because the sea creatures have lost their sting.