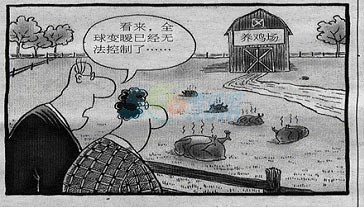 Directions: Study the following picture carefully and write an essay of 160 – 200 words in which you should

3) give your own opinion.

It is known to all that global warming has become a public hazard threatening the survival of human beings. As the picture given above depicts, an old couple is standing beside the fence of a chicken run, saying “It seems that the global warming has already got out of control.” In addition, the picture shows that there are several chickens being roasted in the sun at the side of the road leading to the farm. The cartoon implies that the world’s temperature would be high enough to roast chickens because of greenhouse effect.

The picture is really thought-provoking. People differ in their views on global warming. Voices now come from many quarters insisting that the science about the rise of the world’s temperature is incomplete and that it’s OK to pour fumes into the air until we know for sure. This is a dangerous game: by the time 100 percent of the evidence is in, it may be too late. On the other hand, scientists in one wave after another try to awaken us to the growing threat of global warming. But the governments of many countries tend to turn a deaf ear to the scientists’ warnings. In fact, the Earth’s atmosphere is definitely warming and the problem is largely man-made. The clear message is that we should get moving to protect ourselves. So the general public demand that all nations should adopt strong measures to prevent the increase of the earth’s temperature.

In my opinion, to serve as responsible stewards of the planet, we must press forward on deeper atmospheric and oceanic research. But research alone is inadequate. All governments are supposed to take the legislative initiative as soon as possible. Only in this way can the global warming be put under control. (273 words)

It is known to all that … As the picture given above depicts, … In addition, … The cartoon implies that …

The picture is really thought-provoking. People differ in their views on global warming. Voices now come from many quarters insisting that … This is a dangerous game: … On the other hand, … But … In fact, … So …